Agates are formed in voids, most often in volcanic rocks. Volcanic ash converts to silica gel permeating the volcanic rocks and filling the voids. If carbonates or oxides like iron or manganese oxide are present, beautiful colors and inclusions appear.

Structures Where Agates Are Formed in Voids 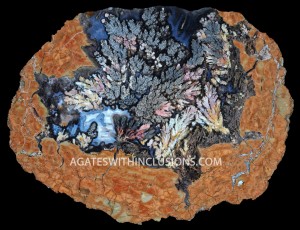 Geode
A thunderegg or amygdule that is hollow. 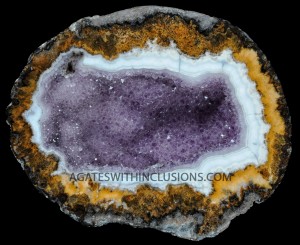 Amygdule
A nodule formed in a gas created void within volcanic rock. 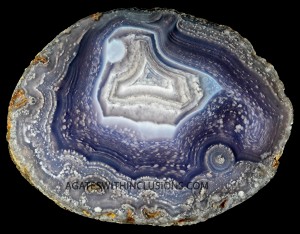 Vein Agate
Agate that is formed by filling cracks and fractures in the host rock.

Distinctive Agate Features and Types of Inclusions
Several types of agate are discussed and displayed here. What follows is a list of terms and examples of each type of agate.

Fortification or Banded Agate
An agate with concentric or repeating bands or stripes. The term, “Fortification,” comes from banding that resembles multiple walls of a fortress. 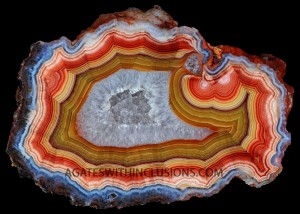 Shadow/Parallax Agate
When a banded agate forms with close alternating opaque and transparent bands, the light entering the agate can cast an observable shadow from one opaque band onto the next. As the parallel bands change their perceived angle, the appearance of movement and perception of depth occur. 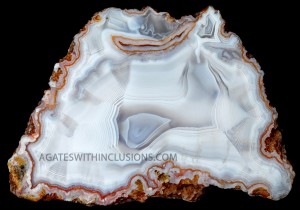 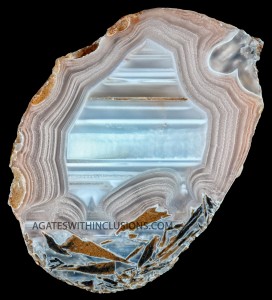 Chromatography
A color phenomenon, caused when a permeable membrane separates dyes. In agates, colors change in the same bands. 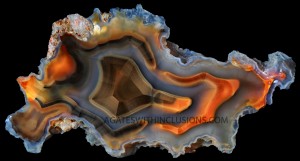 Varying Pigment Spots/Snow Flakes
Occasionally, small dots appear in agates. When the dots are white, we call the agate “Snowflake Agate.” Colored pigment platelets occur in various colored agates. They are the result of the colorization process and, like snowflakes, are not a foreign inclusion. 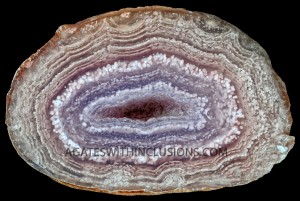 Eye Agate
An agate which has round, concentric rings of banding resembling an eye. The shape of the eye is hemispherical, with the flat surface often oriented towards the exterior face of the agate. 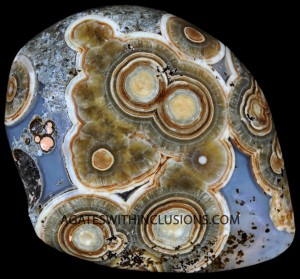 Plume agate
Plume is a three-dimensional inclusion that resembles trees, feathers, tongues, or flowers formed by oxides, minerals and carbonates in the chalcedony. Various types of plume are described below.

Dendritic Plume
Dendritic plume is a three dimensional tree-like inclusion, which come in a variety of colors. 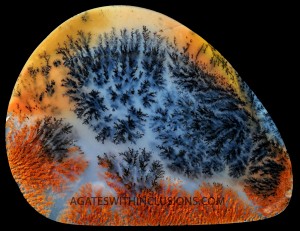 Tongue Agate
The unique shape of this plume is characteristic of the plume deposits at Graveyard Point, Oregon. They also occur in other vein agate deposits, worldwide. This type of plume has colored streaks, resembling pointed tongues, rising vertically through chalcedony. 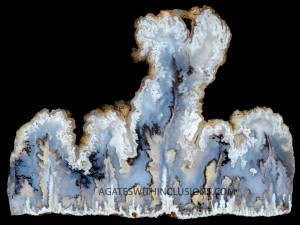 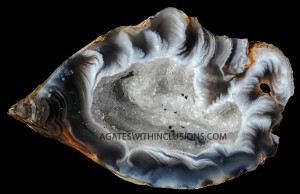 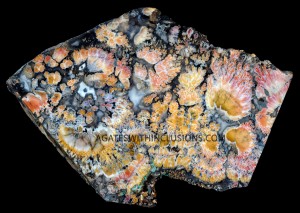 Flame agate
A type of plume that may have deep red streaks, sometimes resembling flames. 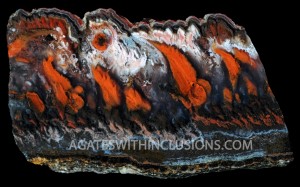 Sagenite or Sagenitic Agate
Sagenitic agate or sagenitic structures (German term), here called sagenite, is a term that describes clusters of acicular or needle-like, pseudomorph crystals of minerals that occur as inclusions in agate. 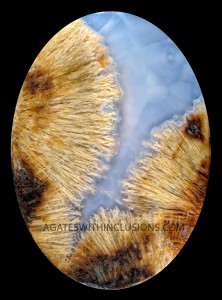 Pseudomorphs
A mineral replacement that retains the original shape, thereby having a “false form.” Larger aragonite needles, found in Coyamito agates and others, are often called pseudomorphs, while smaller, finer needles are called sagenite. They are all pseudomorphs.

Barite in Agate
Barite pseudomorphs in agate appear as flat-bladed crystals and are often mistaken for sagenitic needle-like inclusions. This happens when the blades are cut across, revealing needle-like images. 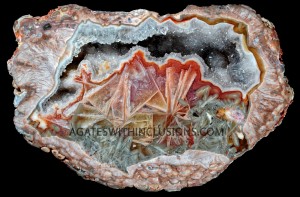 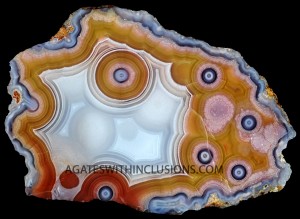 Moss Agate
Moss agate takes the form of hose-like tubes oriented in various directions. Moss is the most common inclusion in agate. 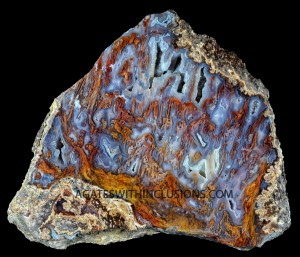 Stalk Aggregates
Stalk aggregates are formed when a material of lesser density, like water, rises up through a viscous gel-like medium of greater density. They are stalactitic in appearance and their growths run parallel to each other.

Dendrites
Dendrites are very thin and delicate, two dimensional, tree-like skeletal crystals. They occur between previously formed bands of chalcedony or in fractures and are usually comprised of manganese or iron oxide. The are typically black or dark brown. 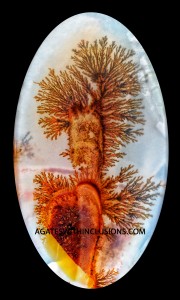 Botriyoidal
Having the form of a bunch of grapes or bubbles. 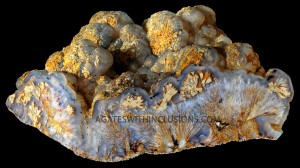 Pisolites/oolites
Pisolites are spherical mineral aggregates that have a concentric structure larger than ¼ inch in diameter. Oolites  (¼ inch or smaller) and pisolites grow by accumulation of minerals on their surfaces. 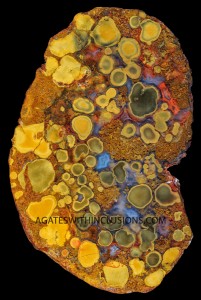 Fragmented Membrane Agate
At an early stage of agate formation, membrane-like layers of mineral deposits came off the walls of the cavity, broke and were deposited in a colloidal silica solution. 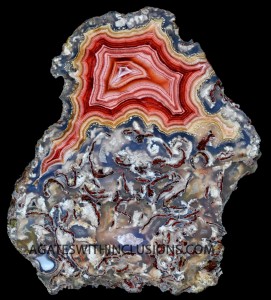 Brecciated Agate/Jasper
This is agate or jasper that has been broken and re-silicated. 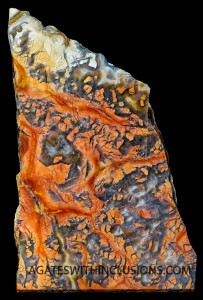 Scenic Agate/Jasper
Agate or jasper with inclusions or markings that form landscapes, seascapes or other images. 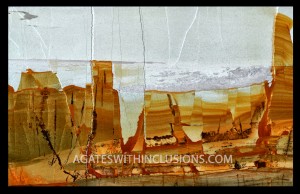 Fire Agate
Fire agate is a type of chalcedony formed from a colloidal silica rich in iron oxide that shows colored iridescence. 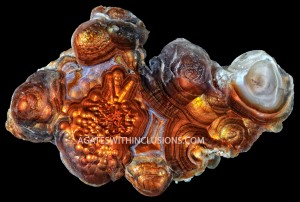 There are still many collecting opportunities at and near known agate fields. Some believe all the good material was picked up years ago and is sitting in a collection somewhere or a storage unit or maybe even sent off to a landfill. This is not usually tRead More...

Agates with inclusions are some of the rarest and most beautiful agates in the world. These inclusions may be sagenitic (sagenite), plume, dendritic, or moss. A description of each of these most common types of inclusions is important here.   Read More...